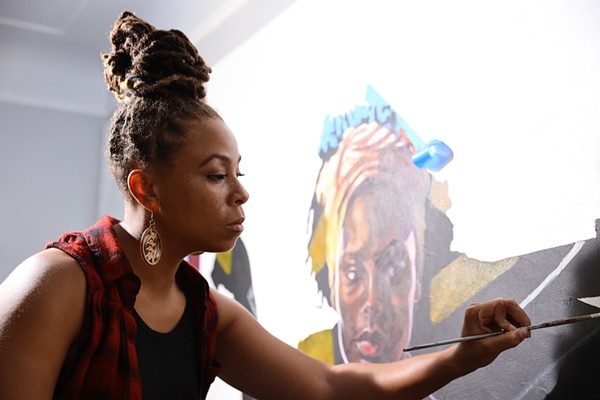 Breann White
Sydney James at work in her studio.

For her first solo exhibition, Detroit-based fine artist Sydney James has been trying her best to keep things under wraps — no easy task in the age of social media.

"That's what Tylonn did last year for his solo show," she says of her friend, the fellow Detroit fine artist Tylonn Sawyer. "We walked in and were like, what the hell?"

"So this is payback," she jokes.

What she can say of her upcoming show — titled Sit Down Somewhere, which opens on Saturday at Playground Detroit — is that she will unveil 10 acrylic paintings inspired by Black women. She says the work is an extension of a previous series she created, titled Appropriated Not Appreciated.

James says she was first inspired to create the series as the #BlackLivesMatter movement against police brutality gained traction. But she felt that the Black girls and women who were victims were often ignored or downplayed in discussions.

"We do often talk about the men that die at the hands of police, or are affected by the actions of police, but we don't really talk about the Black women," James says. "We still hear about Trayvon [Martin], but it's rare that you hear about Sandra Bland. So that's when I made the decision that I was only going to be painting this."

James did a "social experiment" where she placed a painting of herself as the doormat to a group show she was in, and watched to see if people walked on it. (Some people avoided it, she says, but most did not.)

"When someone's already down, people don't have a problem kicking them because they're down there already," she says.

But for her new series, she decided to take a different approach.

So for Sit Down Somewhere, she asked her models to name Black people influential to them. She then painted their portraits inside of the silhouette of the person they named, creating a sort of dual portrait.

The name for the show, she says, has a number of different inspirations. James left Detroit for Los Angeles shortly after graduating from the College for Creative Studies, with plans to try and pitch a cartoon. That didn't work out, but she did wind up landing a gig creating artwork for the ABC Family TV show Lincoln Heights, which featured a character who was a young prodigal artist. James created the artwork made by the character in the show, working on retainer for all four seasons. Eventually, though, it was time to return to Detroit.

After returning to Detroit in 2011, James first began painting on old clothes. Soon, people started asking about them, and she started a business, Grind — Girl Raised in Detroit. Things took off from there, and James began to find work in the city's street art scene, getting tapped as a participating artist for the inaugural Murals in the Market festival. She participated in each year's event, except for this one, joining other mural festivals and taking on a growing number of commercial mural clients.

The work kept coming; last year, James says she created 13 murals in a span of less than 10 months. "I had a hell of a year last year," she says. "It was a great and terrible simultaneously."

James wound up working so much that she got sick. "My mom was telling me to sit down — to just relax," she says, which James thought would be a good name for a show. She ran the idea by her friend Sawyer.

"He was like, 'Oh, that goes back to your original premise, because the argument can be like, wherever a Black woman sits becomes her throne,'" she says.

"I really hope that people really feel something when they walk out," she says. "I don't want you to be the same person."