Great artists are often associated with a piece, performance, or character they can’t escape, whether they’re glad to be known for it or not. Take Jun Kaneko and his ceramic “Dongos,” or Vanilla Ice’s “Ice Ice Baby.” When it comes to being pigeonholed, most notably, the cast of Seinfeld describes what they’ve dubbed “The Seinfeld Curse” — the superstition that their inability to be cast in a successful show post-Seinfeld was due to having appeared on Seinfeld to begin with.

After a successful nine-season sitcom, one would assume the success and critical acclaim of the show Seinfeld would’ve guaranteed the show’s stars long, fruitful careers in acting. Most found trouble breaking out of their respective character’s roles, long after the show’s production. Julia Louis-Dreyfus eventually won an Emmy for her role in The New Adventures of Old Christine, she excitedly held the award and exclaimed, “I’m not somebody who really believes in curses, but curse this, baby!

This brings us to a local artist who in recent years has been applauded for his keystone work — Iggy Sumnik, and his ceramic “Jellybean.”

After making his first Jellybean in 2009, the Jellybean is now Sumnik’s “associated act.” Prior to the Jellybeans creation, Sumnik had a long-established career in ceramics, maintaining a solo studio practice and teaching ceramics in the city of Detroit.

Looking at the canon of Sumnik’s work, one could observe that at the time the Jellybean was created, Sumnik’s aesthetic did a 180 into what it is today.

“Jellybeans were originally developed a number of years ago to add spots of color, texture, and pattern to a botanical garden’s art installation,” Sumnik says. “They worked pretty well, and people were so intrigued by them that they became part of the garden’s permanent collection.”

Having attended Wayne State University in Detroit, living and working in the city pre-nouveau "renaissance," Sumnik’s work gave a nod to the industrial environment he immersed himself in.

When asked about the distinct shift in his work, Sumnik offers this insight.

“I shifted from contextual, cultural commentary, to a more style, color, and pattern focus,” Sumnik says.

The 3-D ceramic Jellybean sculptures invite viewers to step into a whimsical, dreamlike space. Jellybeans immediately elevate any given space through their playful and enticing aesthetic, bringing uplifting and positive energy where it is most needed.

Described as the “bread and butter” of his ceramics practice, Sumnik pays respect to the fact that the Jellybean is now embedded in his namesake — although it wasn’t intended to be at its inception.

“When I made the first Jellybean, I intended it to be on the ground at a botanical garden,” Sumnik says. “It was when I began to hang them in my studio that I saw their versatility. I saw the potential for growth with the jellybean as a dimensional canvas. I had no idea it would become an iconic piece of my craft.”

When asked how the ceramic Jellybean has evolved over the last few years, Sumnik says, “I have learned what doesn’t work and to stay away from those designs, colors, and concepts. The designs that do work are recycled and reimagined, while I think about why one design is more successful than another.”

Sumnik adds, “When I began to make Jellybeans, I treated the surface in an impromptu fashion. Now, much more thought goes into their designs. Currently, they’re envisioned through a sketch well before I transfer them to the pieces themselves. The pieces have gotten better and better, but the best is yet to come.”

Though the Jellybean was originally created to be embedded in the floor of a garden, Sumnik says they have wound up in different places over the last ten years.

“The coolest place I’ve seen a jellybean was in the wine cellar of a high-end restaurant,” Sumnik says. “A collection of 9 or 12 jellybeans I installed and hung in a grid pattern at someone’s home was impressive as well.” 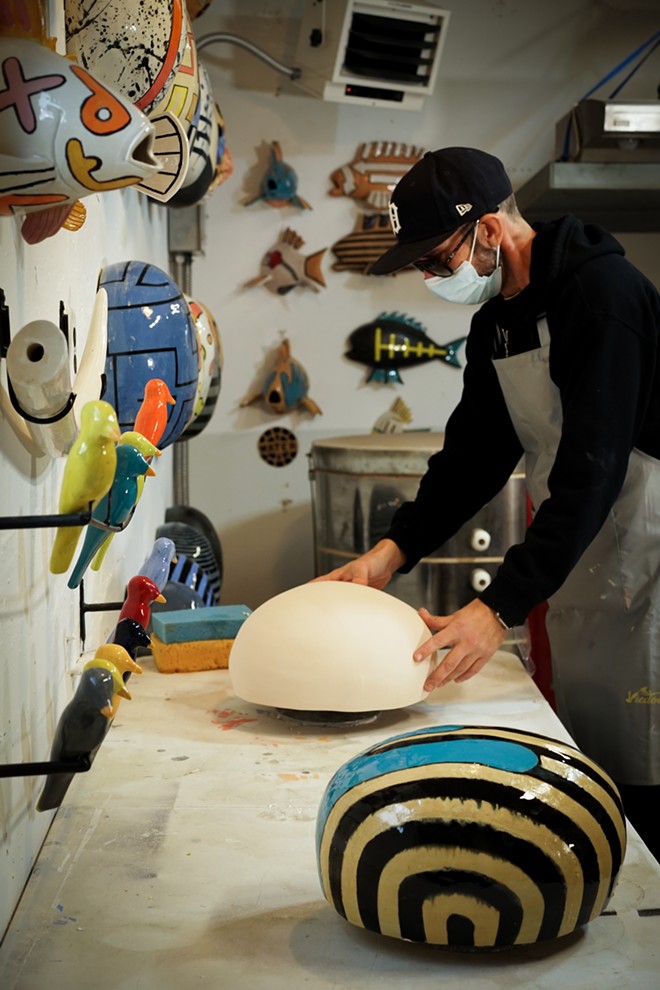 In discussing various places Jellybeans have lived, been installed, and shown, Sumnik mentions that his Jellybeans have fallen victim to “artnapping” — the act of stealing art from a residence or gallery.

“At a house in California where a collection of Jellybeans were installed, a guy broke in and got away with three of them at least,” Sumnik says. “He was caught on their security camera, and took multiple trips to load them in his van.”

He adds, “I felt upset for my client, but at the same time, I was complimented that my work was worth value and effort to steal.”

Sumnik acknowledges that most of his Jellybean sales come from commissions. Art collectors will order Jellybeans for their spaces, hoping to bring color and joy to their homes.

“The Jellybean pays homage to my roots,” Sumnik says. “It is easy to find a place on your wall for the sculpture. It is a dramatic and welcome change to two-dimensional wall art.”

Bringing it back to the Seinfeld Curse, and the Jellybean being Sumnik’s “associated act,” we ask him if he has plans for another great work to take the place of the Jellybean.

“There is so much room for development, but the real question is do I have the time?” Sumnik says. “The orders don’t slow down, and now I’m starting to ship them internationally.”

His Jellybeans have a $550 retail price.

“The price point is friendly — for now,” he says.

Iggy Sumnik’s custom “Jellybean” shop will be open this weekend. More information is available at artbyiggy.bigcartel.com.