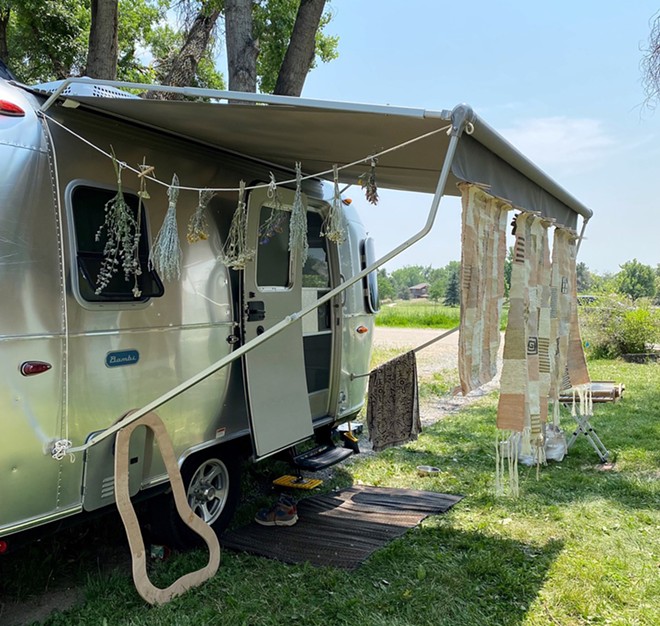 Courtesy photo
Detroit artist Kayla Powers traveled the country in a mobile studio, making dyes from plants and other items she foraged. 

Kayla Powers is a Detroit-based artist and weaver exploring the colors of the urban jungle in a way that is at once both innovative and traditional. For the past four years she's been using foraged and locally grown plants, many of which are collected from vacant lots from the east side of Detroit, to create dyes, pigments, and watercolor paints. From the plants, Powers is able to create a surprisingly wide-ranging palette of colors.

Her journey began more than 10 years ago when she took a weaving class at the Kalamazoo Institute of Art. "As I think many weavers will tell you, there was just something that clicked for me," she says. She already had a background in farming and gardening, and eventually began working at a school in Portland, Oregon, where she learned to forage plants and dye with natural materials.

She taught there, and still continues to teach workshops about foraging, and using plants to make dyes and paints. She says that she loves teaching and especially loves that it attracts a wide range of people. "It's an intergenerational experience," she says. "And everyone is coming at it from a different place, and bringing with them different experiences."

Powers moved back to Michigan four years ago and started her business, Salt Textile Studios, selling hand-woven and hand-dyed home goods, but recently has been transitioning to a focus on creating artwork. "Not to say that those weren't artistic," she says. "Because they were. They were beautiful. But there's something different when you can use the thing, versus when it's really just meant to be appreciated for what it is."

About a year ago she created a public art project called "local color." She hung up 12 tapestries, each measuring about seven feet long, and all dyed with plants from Detroit in the Dequindre Cut greenway. "That was a really nice way for me to reach out to the broader city community at large," Powers says. "And to show off this art form that I think often is tucked away in a museum or like behind glass. Normally it's like, 'Don't touch, the colors will fade, the fibers will start to fray.' And so it was so fun to put it outside and just be like, it doesn't matter; touch it, take a picture with it."

Recently, Powers turned her sights on something a little less local, but still decidedly place-based. She took a three-month road trip and decided to bring a mobile version of her studio with her. "What I'm really trying to do is to work with the local plant life wherever I am," she says, "trying to highlight the local palette that would be in a certain place and to tell stories of plants and a place through color." 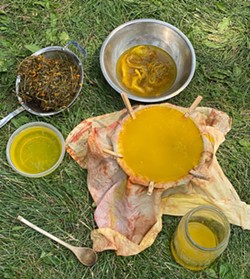 Her process is the same no matter where she's working. First, she gets to know the area, by wandering or hiking around. "I cover a lot of ground on foot or by bike and really get to know all the plants and what season they're in — what they're producing, how are they doing, if they're looking healthy or not," she says. "I just kind of make note of all these things."

On her travels she was particularly excited about a stop in New Mexico that allowed her to work with cochineal, a beetle that lives in prickly pear cactus and known for a striking red color. "So I was able to use that to make paint and to dye yarn, and it's just such an incredible color and so different from anything that I have in Detroit," Powers says. She also says she enjoyed getting the chance to use the abundant and iron-rich red clay from the southwest for dyeing.

She notes that it's not just the colorant material that makes the outcome of the process unique to the place — whenever possible on her journey she used local water from rivers and streams, because the pH and the minerals in the water can interact with the dyes and change how the final product looks.

Powers will be displaying the work that she made on her trip at an open studio and backyard art show that is free and open to the public from 1-6 p.m. on Saturday, Sept. 4. She calls the body of work "The Shape of Home." See her website salttextilestudios.com for more information.