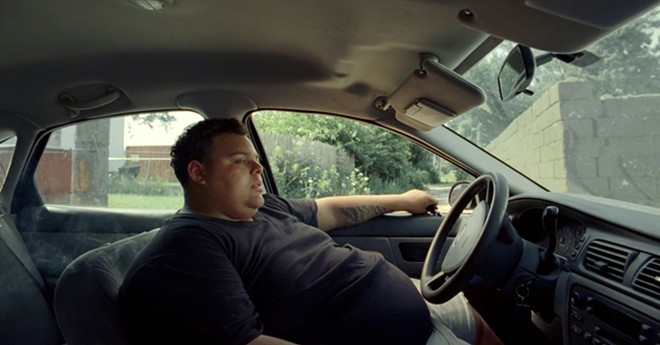 News coverage of billowing industrial smoke recedes into footage of lushly reclaimed, depopulated urban space in the opening of Kevin Steen’s new short film “Daron, Daron Colbert.” Eventually, this chemical exhaust recedes into the background, morphing into a distant feature and fact of life. The 13-minute film, set in Southwest Detroit’s Delray neighborhood and screening in this year’s celebrated Locarno Film Festival in Switzerland, is enveloped by a kind of blunt surreality endemic to the neighborhood, a symptom of the area’s longtime abandonment by those with the power to aid it. In light of the impending construction of the Gordie Howe Bridge and the all-but-forced relocation efforts of its longtime residents (also enabled by civic neglect), the act of capturing its dwindling community onscreen acquires a distinct sense of urgency.

For Steen, a Michigan native who’s worked extensively in both commercial and narrative film production, presently as part of RATHAUS Films, a project spotlighting fictional characters amid Delray’s swiftly changing landscape was initially the plan. But after a chance run-in with Daron Colbert, the film’s star and key structuring presence, Steen’s aspirations shifted toward conveying something about the area more directly rooted in a longtime resident’s point of view.

“Obviously environmental racism is something that people are talking about more and more,” Steen says. “Before Daron, I was writing a script set in that world. How would growing up there next to industry and pollution affect you generationally? And when I met Daron, I was like, here’s a person who’s grown up in and around this world his entire life. Why would I write a character when one already exists, especially one that is an aspiring actor?”

Colbert, who will be 23 in September, describes his upbringing as largely solitary, strongly rooted in Delray’s sparse environment. The area lacked parks or much to do for most of his upbringing, and he can be seen within the film navigating largely vacant landscapes, nearly always pictured alone. In an interview conducted by phone, he described his dad’s house as one of just three on the block for many years; today, though, it’s the last one left.

“There weren’t many kids in the neighborhood when I was growing up,” recalls Colbert. “We felt like we were our own environment, segregated from the rest of the city.”

Growing up throughout his teens, Colblert often found himself hanging around a fire station near his home, where he’d get to know firefighters as well as a friend named Connie, who was close with the crew there. When he was 14 or 15, a director came knocking for actors to feature in “Wait 'til the Wolves Make Nice,” a short film by Jess Dela Merced centered on a group of bored Delray teenagers drawn to mischief by a new arrival. Colbert embraced the opportunity, which led to work on a second production, Robert Joseph Butler’s “The Girl on the Mat,” a sports drama about female wrestlers.

Across his work (“Daron, Daron Colbert” is his third film project), Colbert describes the excitement of trying something new and showing sides of himself he can’t display in real life as part of what pulls him to acting. By the time Colbert approached Steen, while the latter photographed a stray cat in a Delray field, he’d accrued enough confidence in his portfolio to introduce himself to others — and especially filmmakers — as an actor.

“He just had this confidence,” recalls Steen. “He was in this short film that was executive produced by Spike Lee that played SXSW. So when he said he was an actor, he actually is — he’d done it before.”

About a year after their initial introduction, Steen reached out to Colbert and asked him to show him around, giving him a better sense of his experience in Delray. By the end of their day together, Steen asked Colbert to be the subject of and a key collaborator on the film.

Working together to structure their story, which enmeshes newsreel footage, environmental photography, and voiceover with scenes — some staged — of Colbert going about his daily domestic and work routine, the short’s abstract structure is anchored by its effort to provide a portrait. (Though the film was shot quickly, editing took about six months.) This becomes clearest through a series of monologues Colbert delivers in three parts, recounting a series of names he’s gone by and their origins. Conveyed with both an offhand confidence and a certain seriousness to the camera from a darkened, wood-paneled room in his late grandmother’s old Delray home, this structuring device evokes Barry Jenkins’ feature-length Moonlight in its elaboration of a young male identity and persona that’s highly particular, and only more so for being visibly shaped by the strongly evoked contours of his environment.

Though Steen points to a stew of influences ranging from the Ross brothers’ pseudodocumentary Bloody Nose, Empty Pockets, Ken Loach’s 1969 hallmark Kes, and an early 1995 Vin Diesel short called “Multi-facial” — alongside other projects he’s worked on himself, none of them subsume his newest work. Whether Colbert’s delivering a monologue, cutting grass, or working at a tire warehouse onscreen, there’s a sense of directness and a lack of compromise to his presentation that’s linked deeply to the film’s intimacy with him as a subject and creative collaborator.

While much of what Steen and Colbert discussed and filmed concerning his life in Delray — mysterious explosions waved off by hazmat-sporting men, roads bubbling up from mysterious spills — doesn’t make it into the film, the weight of these events remains felt throughout. With refined, unobtrusive camerawork and graceful editing, Steen and his collaborators spotlight a place and community he describes as “forgotten” while also, in ways spearheaded by Colbert’s monologue, making space for a quiet, firm confrontation. By addressing their viewers directly, they in some way call an audience for the neighborhood and its history into being — and in doing so make Delray and the experiences had there a little less forgotten. The result of all this, serving now as both a formidable short and a calling card for an early-career actor, may outlast the homes on many Delray blocks.