Writing for Public Books last week, Camilo José Vergara offered a special perspective on Detroit. He’s been taking pictures of Detroit for almost 40 years. In the 1990s, he even proposed that a dozen blocks of downtown Detroit become a permanent museum of ruined skyscrapers. Across the world, the idea stimulated people’s imagination; in Detroit, the powers that be didn’t think much of the proposal.

But Detroit’s elites haven’t really seen Detroit the way Vergara has. Though he insists he never studied art history, his eye is attuned to the way visual expression is forever sounding echoes of the past. And the Chilean-born photographer doesn’t just see it in the bas-reliefs on downtown’s showpieces. As he argues, the real energy and creativity in Detroit is in the city’s neighborhoods, the murals and advertisements painted on its walls, the relics of Detroit’s majority-black consumer culture.

That’s why we were so interested in his book last year, Detroit Is No Dry Bones, and the recent updates he’s written for blogs and magazines. Now the man who once proposed cordoning off downtown’s empty buildings visits a downtown where the buildings that remain are filling up with tenants. His February visit provided ample opportunity to also check in on some of his favorite buildings in "the neighborhoods."

Not all of them remain. Perhaps some of them were razed for Hantz Woodlands, the project to save part of Detroit by turning it into a forest for the foreseeable future. Vergara describes how hundreds of volunteers helped the multi-millionaire owner of this land plant trees. Even today, a mere decade later, some city staffers wonder if it was such a good idea to sell the land off like that.

Vergara’s eye also loves the power of an odd juxtaposition. He zeroed in on the bright, cheerful, bucolic paintings done on plywood by Lutheran Christians; the boards were then used to cover gaping windows and doors on Detroit houses. His photos of Brightmoor show off the happy images as if they’ve sprouted from the snow on a chilly winter day.

Also, Vergara lingers lovingly over, of all things, a gas station. The average reader may not realize the photographer has long harbored a fondness for all the 1920s art deco filling stations. 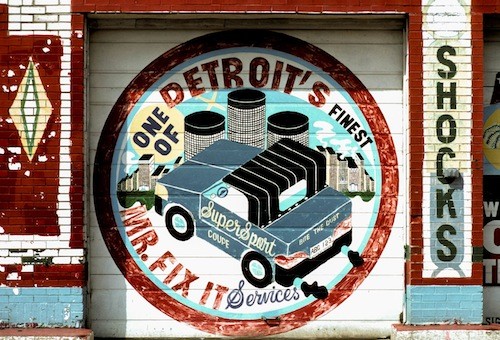 This year, one of his favorites turned up missing: the Mr. Fix-It station on the northwest corner of Epworth and Warren. Vergara identifies the high-key advertising art that once decorated the building as that of "Eugene," an artist with a playful style, often featuring lettering accented with stars. 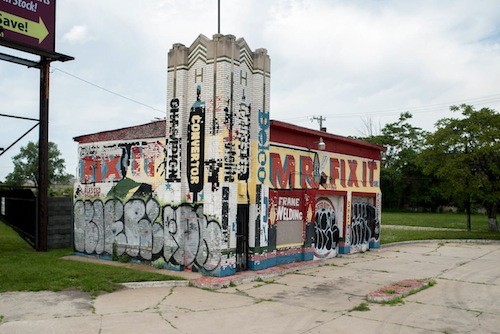 Vergara has long considered "Hi-Speed" to be Eugene's masterpiece. As Vergara writes, "The abandoned shop was later painted grey by the city’s anti-graffiti task force. In 2018, I found that the building had been demolished ..."

Photo courtesy Google Street View
When will the powers that be see such buildings, such art, as an asset? 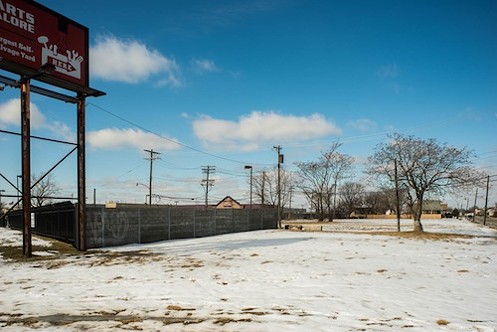