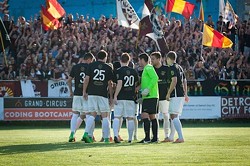 Photo courtesy DCFC
A story released by the Associated Press today takes a look at soccer culture in Detroit, amid word that leading oligarchs would like to establish an MLS team in Detroit, riding on the grass-roots enthusiasm engendered by the scrappy DCFC team, newly installed in Hamtramck's Keyworth Stadium.

If you haven't seen the team play a match at the stadium yet, the excitement on the playing field spills over into the audience, with a raucous and rowdy fan section that's fond of lewd cheers and colorful smoke bombs. The team and its supporters raised at least three-quarters of a million dollars to renovate the 80-year-old field and have drawn capacity crowds all summer, which goes to show you just how dedicated fans can be (and helps explain why our area billionaires are sniffing around the edges of the scene).

Catch the excitement in the story and accompanying video provided by the AP and see if they don't get it right in your view.