Artist Ellen Rutt will soon turn 30 and she's nervous — but it has little to do with her milestone birthday, general aging woes, or the pressure to fulfill the "30s are the new 20s" trope. She's concerned with the Earth, global warming, and how to make people care.

"If I'm going to make work in places and outdoor spaces, I have to acknowledge that some of these places might not exist," she says. "I have to acknowledge the context that it exists in, which is we're at this potentially pivotal moment. Maybe it's arbitrary that I'm bringing it in or making it part of the theme, but it feels like if I don't do it — I feel like I want to, like, care a lot about it and so I'm like, yes, let's fucking talk about it."

Known for her use of bold geographic shapes layered strategically (and, sometimes, spontaneously) as a way to reckon with the variants between control and chaos, as well as her bold color palette, Rutt's style is instantly recognizable in and around Detroit.

For Rutt, whose work has graced album covers, interactive set installations, throw pillows, concrete, clothing, canvas, and most notably, large-scale murals that can be seen on surfaces all over the world, taking the next step meant taking a step back to explore the impact of one's impact. She says there was no real "a-ha" moment when it came to the development of the thesis for her latest solo exhibition, This Must Be the Place; she cites the physicality of the process and the specificity of her surroundings as what encouraged her to fold the environment into the work instead of creating work about a place.

"How do I, as an outsider, enter spaces with as much reverence or respect as possible?" she says. "I love site specificity. I wondered if there was a way of bringing some aspects of site specificity back into the work, but somehow translating it into a surface that I could then remove from the place it was made. That's when I just started going out with a canvas and tracing bike racks or gathering textures of subway grates and evidence of all these places."

For her latest project, the Detroit-based interdisciplinary artist found herself collecting environmental mementos of her travels and explorations of urban, rural, and natural areas — dirt from Arizona, sand from the desert, tracings of New York City crosswalks. This Must Be the Place consists of a collection of what Rutt has come to refer to as "place" paintings. Though not unlike her previous works in terms of tone, palette, movement, and aesthetic, This Must Be the Place does offer a textural element that provokes a conversation about the endangered world beyond the canvas. Rutt likens it to a postcard.

"It started to become this quest for how can we feel a sense of belonging in rural Alabama and in inner-city Detroit, and how can we connect to those places and remember that these systems are interconnected?" she says. "They are not separate from one another. I'm not preaching, like, love and light — I actually think it's, like, fucking dark, but I don't think we have an option. We don't get to not look at it."

In addition to her solo exhibition, Rutt curated Sign of the Time — a Detroit Art Week-exclusive exhibition that aims to subvert commercial ad space into powerful, direct-from-the-source art space. In partnership with Playground Detroit and Save Art Space, an open call for artist submissions in April resulted in more than 700 entries from all over the country. Rutt was tasked with selecting only nine works to be featured (10 if you include her own entry), all of which will be displayed on various Detroit billboards through the month of July, as well as in a comprehensive exhibition at Playground Detroit for a more intimate look at the work and artist statements.

Rutt admits that even some of the pieces would fail to translate to the large format of a billboard, and it was the message-packed works that spoke loudest.

"I had never curated before," she says. "The number one feeling was just this overwhelming gratitude for people who submitted all the work — that I was like, this person's going to thrive, but they're not right for this. I was so impressed by how many people submitted things that felt political, which is really, I think, maybe what I was after, and I hadn't realized it going into it."

She cites the selected work of Jonah Welch, a 27-year-old transgender and non-binary artist from Wisconsin whose candy-colored art reads "Trans people are sacred" as a must-see message. "I'm like, I want that on a billboard. Someone else said, 'We demand an end to police brutality now!' I want that, and I want everyone in the city to know that."

The winning work from Detroit-based Bulgarian artist Dessislava Terzieva asks, "Did we dream too fast?" above a torn and pasted photo of a power plant. Terzieva's entry makes for a thoughtful companion to Rutt's own billboard design — a digital collage that boasts her signature color scheme and states "Global warming is a global emergency." In the corner, the words "act now" are repeatedly stamped behind a black-and-white photo of plastic trash.

"I need our government to recognize that it's an emergency and then act accordingly," she says. "I know that they can turn it around if they recognize it as [the] emergency that it is. I really believe that."

When discussing the future, Rutt jokes about not "biting the hand that feeds" in reference to her steady stream of mural commissions, as she believes mural work has become more commercial. Non-jokingly, she says that her commercial and personal work balance has been "out of whack," which she came to terms with while fulfilling an artist residency in New York last year.

"That was like the first time when I got to sort of slow down for a second and be like, alright, what is the work that I make when I don't have an outside influence?" she says. "I love working outside. I love working in public spaces. I love creating work in public spaces. I was just getting burnt out by projects that felt like they should be fun and so many of them that I felt like I shouldn't be complaining about, but I'm also so fucking tired."

Looking ahead, Rutt says that she has set some future sights on pursuing grad school, as well as a return trip to Berlin, and a more extensive trek through Europe while continuing her obsessive education via her expensive Audible audiobook habit. When asked, Rutt confirms the title of her exhibition is, in fact, inspired by the 1983 Talking Heads song "This Must be the Place (Naive Melody)," a song she says she listened to in heavy rotation during her place-painting process and one that informed her message of belonging.

"Home is where I want to be, but I guess I'm already there," she says with a slight sing-songy cadence. "It feels like, man, we just have Earth, we just have it. So I think there were a few moments where I was like, 'How can I possibly help people remember this sense of home and belonging?' I think that on a deeper level we protect things that we care for. It's people, it's places. If you care for your house, you don't let your yard go to shit," she says. "Just because I'm not experiencing the most dramatic effects of climate change doesn't mean that it's not my job. In fact, it's probably more so my job."

Ellen Rutt's This Must Be the Place opening begins at 6 p.m. on Saturday July 20 at Eightfold Creative; 2831 E. Grand Blvd., Detroit; playgrounddetroit.com; Event is free. 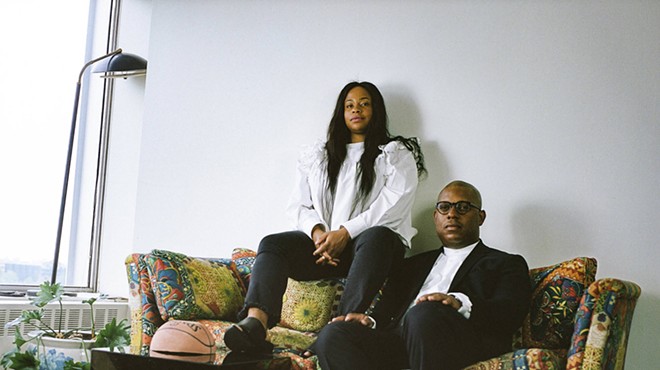