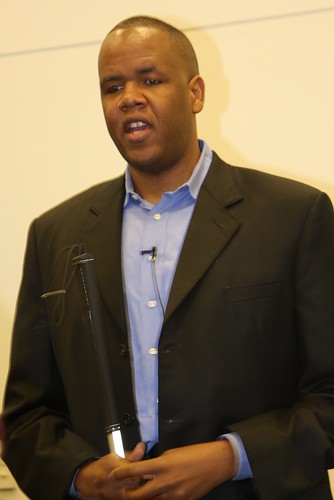 I hear there are some folks who think President Obama's "doing too much." I know ... I can't believe it either. In this age of nationwide political disenfranchisement, our country seemingly still hung-over from Bush & Co. (where fear politics ran rampant and two wars by-and-large resulted in anti-social, big biz policy), I'm stuck swivling in my chair, baffled and dizzy, after reading this CNN article.

The jist: "Fifty-five percent of the people questioned in a CNN/ Opinon Research Corporation survey released Wednesday that since he's taken over in the White House, Obama has tried to handle more issue than he should have."

This has to be the textbook definition of a "what the fuck?!" moment. Do people not understand how many knots have to be plied apart before we even see the length of the rope we're working with? C'mon ... doing too much?

I think Obama has what it takes to get America back on track, more than anyone else that stood behind a podium for the last two years, but there was a recent decision he made that left me my head itchy, my face contorted, my heart slightly bruised.

After public outcries (the loudest of which jetting from the mind and mouth of Quincy Jones) for increased focus on the arts, Obama recently announced

an Arts & Culture Czar. The candidate: Kareem Dale, a nearly blind ex-lawyer who also works as Special Assistant to the President for Disability Policy. It's not his visual impairment that's tainting my emotional palette --- after watching this video you can see why understanding visual art and the ability to see aren't distinctly correlative --- but more his lack of experience in the arts community.

According to a recent report from the National Endowment for the Arts, 6% of all artists were unemployed in the fourth quarter of 2008. That's twice the rate of all other professional workers. Even more frightening is that in 2007, 50,000 artists filed for unemployment. The numbers from 2008 recently came in at 129,000 out of work artists.

And while the Michigan Council for the Arts & Cultural Affairs awarded $7.9 million to 290 groups statewide for the 2009 budget year (which created about 2,300 jobs), Governor Jennifer Granholm's 2010 budget announced just last month lacked A SINGLE PENNY for arts grants. Not a cent. Nothing. Ugh ...