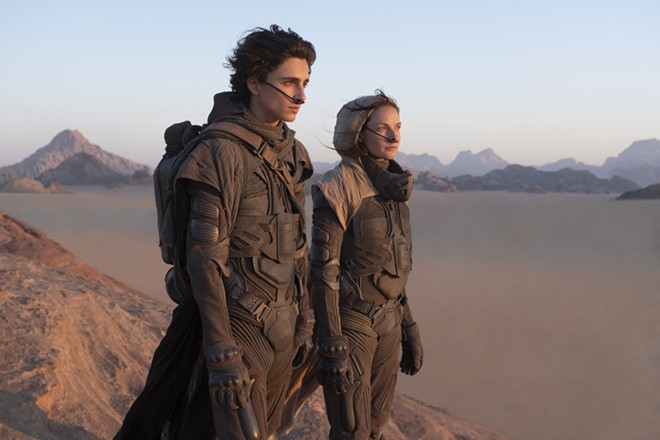 In making what friends have jokingly referred to as "half a Dune," the hopeful precursor to a still-unfinanced Part II that would complete an adaptation of Frank Herbert's 1965 novel, director Denis Villeneuve has achieved an apex of coolly impersonal ambition. Sometimes updating but never upending the novel's robust allegory of settler colonialism in an arid, resource-rich land, whatever voice or penchant for expression Villeneuve can be said to have is spent here totally in service of the bestselling material. His attempt reflects a grasping at an authoritative version, a movie that will succeed where others have failed.

A financially successful, cinematic version of Dune has indeed proven elusive: an attempt by Alejandro Jodorowsky in the 1970s failed to launch due to going wildly over-budget, and David Lynch's richly strange 1984 adaptation was a box office disaster (though the Syfy channel had some success with a pair of miniseries in the early 2000s). Before turning his impressive but historically inexpressive directorial efforts to a dutifully revitalized Dune, Villeneuve made a name for himself over the past decade as one of Hollywood's most ambitious workmen. Hammering away at ever-larger projects (Arrival, Blade Runner 2049, and now this) in a manner that situates him most closely to Christopher Nolan (an obvious role model), this Quebecois striver has remained largely anonymous within his own body of work. Whether working in surrealist or political thrillers, science fictions like his far more angular Blade Runner, or some early and hardly special issue-driven works, the man's focus has remained on craft and presentation, lending outsized polish to a range of scripts which have trended toward the undercooked. His stake in his material beyond a certain set of center-left tastes has remained as reliably elusive as any sign of his artistic aspirations beyond a career path. No artist's artist despite his finesse (or whatever else he might think of himself), Villeneuve's sights seem trained on courting — and wowing — his viewers, aided by the help of a growing army of screen craftsmen and technicians.

Smoothing the textures of an overtly psychedelic work into something more crisp, regimented, and austere in its presentation, Villeneuve works here with Greig Fraser (previously of Zero Dark Thirty) to render the vast deserts and stone ziggurats of planet Arrakis — where Dune both finds its title and spends most of its considerable running time — in frames drained of color and light. As built out by production designer Patrice Vermette (a longtime Villeneuve collaborator), the film's world feels sturdily realized from a design perspective, with an orderly air of minimalist purpose and self-conscious rationality. The cast moving through it, by contrast, embodies a more baroque set of customs and traditions, cherry-picked, it seems, from both the novel (which I'll acknowledge I've not yet read) and our own world. Cultural practices ranging from face tattoos, head scarves and bagpipes to military parades all feature, as does spitting as a greeting: an act considered a generous sharing of one's water in Arrakis's drier climes.

Taking up many of these practices (as dominant parties often do) are the members of House Atreides, whose eagle-like insignia underlines their militarized form of outwardly compassionate Western-style rule. Led by Duke Leto (Oscar Isaac) and his more spiritually focused partner Jessica (Rebecca Ferguson), herself a member of the ancient and basically telepathic Bene Gesserit class, House Atreides works to prepare their son Paul (Timothée Chalamet) to carry on the Duke's leadership while embodying these twinned traditions. A reluctant chosen one in a patriarchal line, Chalamet's internalized performance suggests a brewing inner world for a young man on the cusp of becoming, basically, a messiah. A fairly rich figure as these things go, Paul straddles the here-gendered realms of the physical and spiritual, political-military and religious, as well as his new, foreboding home of Arrakis and his old, stately home of Caladan.

This last tension is what drives Dune's core action, with imperial leadership passing control of Arrakis to House Atreides from their cruel rival in Baron Harkonnen (Stellan Skarsgård, buried in heaps of prosthetics). With the deal granting House Atreides riches in the form of the psychoactive mineral "spice," found solely on Arrakis, the offer proves both impossible to refuse and too good to be true. As the Duke's pale cohort assumes control in formalized ceremonies absent any air of celebration, they inherit not just the planet but also its elusive, well-adapted, and justly wary native people, called Fremen, over whom Leto hopes to exert a more conscientious — albeit still extractive — form of rule. As such, each move on the Duke's part requires careful calculation, a tightrope walk over troubled political waters.

Villeneuve navigates these with little more assurance than the Duke does, aligning us throughout with a nearly all-white ruling clan negotiating occupation with the Fremen: a population played (I believe entirely) by people of color from a range of backgrounds. With these tensions within the film's arc yet to be resolved, Chalamet as the film's light-skinned savior stands as an uneasily dominant figure, the film's lackadaisical pacing leaving Arrakis' occupied people as peripheral — if sure to be eventually pivotal — figures.

The Fremen's Chani, for instance, who's played here by Zendaya, appears largely in repetitive dreams and visions — poor Terrence Malick imitations that show Villeneuve's weak grasp on filmed subjectivity. Her eventual arrival — as a love interest and object of both Paul's fears and fascination — proves an utter anticlimax, with the two lacking any evident measure of chemistry or onscreen charge together, at least for this installment. Here more than elsewhere in the film — which suffers from these same weak points throughout — Villeneuve's rendering seems exacting and reverential but not remotely introspective. An emblem of contemporary blockbuster filmmaking upheld here by a sterling cast, he's at his weakest when struggling to depict desire, attraction, chemistry — or any form, really, of irony or inner life. His predecessors in Nolan and George Lucas, his clearest models, have often suffered from the same.

The film's own atmosphere of cool precision — of "craft," the thing Villeneuve has to date earned considerable credit for — is undermined, too, by messiness across its duration. As Villeneuve struggles to set up and stage even some more straightforward portions of the novel's unwieldy plot (a swordfight, for instance), well-wrought effects capped off by an abrupt, arbitrary finish can get the film only so far. While there's much to give Dune credit for as a professional achievement, it's becoming increasingly tough to celebrate cinema that aspires to so little beyond its own sense of scale — or to applaud works that refuse to resolve, as this does, in a single installment. Placing its faith in a version of technique that feels less like artistry than store-bought polish, Dune as a sprawling work of blockbuster science fiction isn't an exception in our current franchise-dominated landscape anymore; it's the rule.