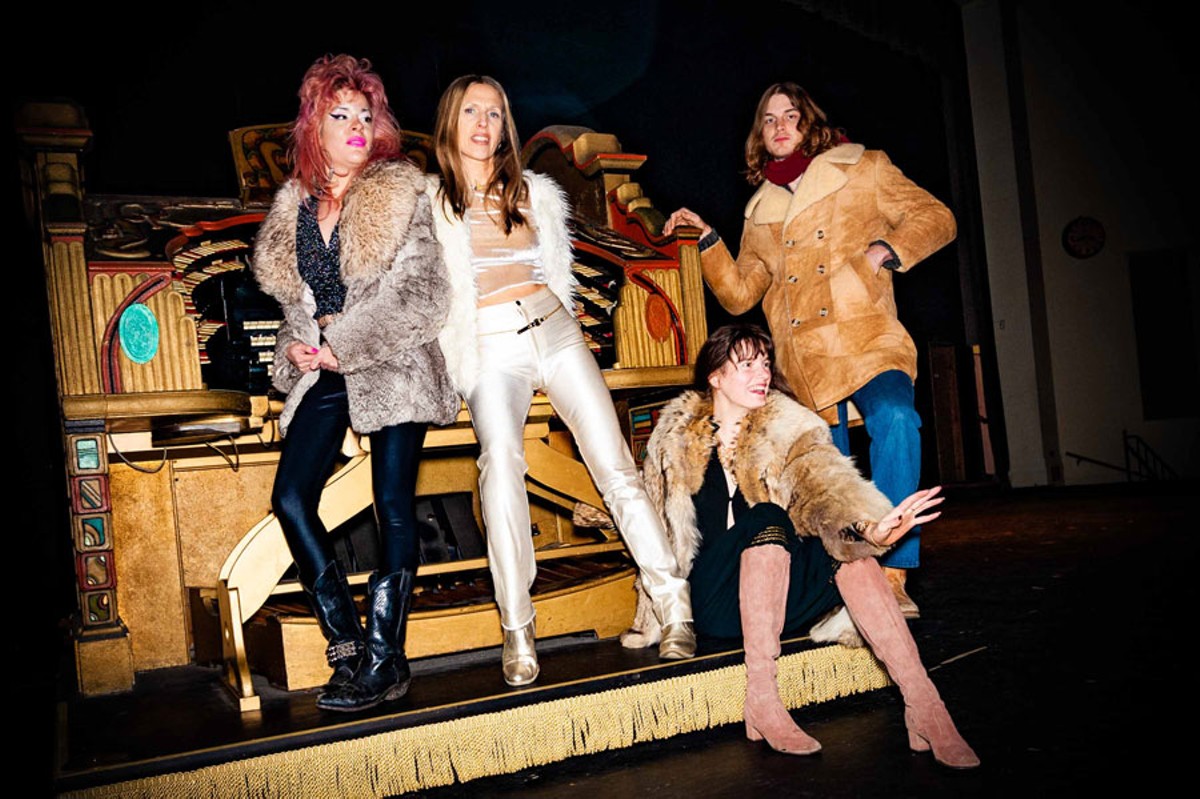 A snippet from a slightly warped VHS copy of an undated documentary exists, in which a group of men can be seen rolling a 1.5-ton pipe organ down Michigan Avenue.

"Everything seems to be going smoothly," the film's narrator says. "A tribute to the ingenuity that ordinary people can display when they have a fanatical devotion to a cause."

No one is as fanatical when it comes to the preservation of Southwest Detroit's historic Senate Theater than the members of the Detroit Theatre Organ Society — a group of volunteers that formed to rescue the venue from back-tax decay in 1962 — and Zoë Villegas, a young neighborhood native, spiritual activist, and devout David Bowie enthusiast.

Built in 1926, restored in 1949, and then renovated to accommodate the DTOS' massive acquisition of the Fisher Theatre's discarded "Mighty Wurlitzer" (the 8th largest Wurlitzer pipe organ ever built), the Senate Theater has served as many things to many people. For Villegas, the theater is a vital vestige of the Southwest Detroit community and a venue that has the ability to intersect the changing neighborhood's rich histories. For organ enthusiasts, the Senate is a precious and rare haven. For others, it's merely a curious landmark along their daily commute.

"My dream is for the Senate Theater to be the place where someone with an idea and a few people behind them and just pitch," says Lindsay Robillard, a playing member of the DTOS and head chair of the Senate's fundraising board. "I want to make dreams come true."

But it needs help. While the group has silently kept the theater alive, many residents don't even know it's open because it needs a new marquee.

"The Senate was always like a time warp, and it had this very spiritual vibe in here, you know? And the marquee is just like this beacon," Villegas says. "It's a total landmark on Michigan Avenue and it's interesting that people have their own memories, or a lack of memory where they're like, 'I can't remember a time I've ever been in there, but I've driven past it every day of my life.'"

In its lifetime, the Senate has hosted Catholic choir concerts, X-rated films, and, as recently as last year, a RoboCop screening and film panel. It has seen world-renowned organists and back-to-back screenings of horror classics and silent films. This month, it will celebrate David Bowie with a screening of D. A. Pennebaker's 1983 concert documentary, Ziggy Stardust and the Spiders From Mars. The event will also serve as a fundraising effort to restore the theater's marquee, which DTOS was forced to remove in 2016 due to rust and weathering.

"The theater has lost a lot of the audience by people not being able to even see that they're operating," Villegas says. "This has turned into a much larger fundraiser than we expected, and people have been really receptive to us just wanting to reintroduce people to the Senate so that we can bring back a sustainable audience."

After settling on an event budget of $1,200, Villegas' GeminEye Tarot began conducting tarot card readings in the theater's women's lounge during October screenings of Dr. Jekyll and Mr. Hyde and The Exorcist to help raise the funds to secure the film rights to Ziggy Stardust and the Spiders from Mars and a liquor license, as well as to cover printing costs for marketing materials. Villegas also threw a "Welcome Home, Venus" dance party (to honor Venus' trip through retrograde) to add some dollars to the cause.

"When I was doing readings here, I had people from the neighborhood who I've known for my whole life and who came in and said that they had never even been in the theater before," she says. "They never even knew it was open."

"Stardust at the Senate" will mark the end of the Senate's 2018 campaign to match a $30,000 grant from the Detroit Regional Chamber and General Motors Foundation's NeighborHUB program. During the duration of the campaign, the Senate raised $15,000 from individuals. This, however, is just one step in the Senate's resurgence as a neighborhood theater. The grant would fund what Robillard refers to as a "bridge project" which would consist of the construction of a substantial yet temporary marquee (the full restoration of the theater's 1949 facade would cost an estimated $300,000). The money will also help beautify the theater's adjacent lot, as well as provide some financial wiggle room to host free family-friendly screenings and events to engage the community and raise awareness so that the Senate can eventually establish a sustainable business model.

"I ended up writing that grant, but when I decided I was really going to step up and be more involved, it became clear that I wanted the audience to reflect the neighborhood we're in better," Robillard says. "And I figured the way to do that was to start introducing myself to people. And that was the first thing I heard — like, well, no one knows it's open. So, OK — step one, get a marquee. And as I've been talking to people, they're like, 'Oh, that's awesome. I'm so glad to hear things are happening there. I want to help. Let me introduce you to two more people.' And it's been growing exponentially and it's been really amazing."

In addition to the screening, "Stardust at the Senate" will host a pre-screening film panel with Ricky Rat of the Trash Brats; Rudy Hill of Cruisin the Barrio Radio and Psychopathic Records; and Detroit's own rock 'n' roll impresario, Stirling. There will also be performances by Heartthrob Chassis, live DJs, Bowie-inspired artwork will be on display, a photo booth will be on site, and a special prize will be awarded to the evening's best dressed — or as Villegas suggests, "whoever best embodies the spirit of Bowie."

It's no coincidence that the event falls between what would have been Bowie's 72nd birthday and the third anniversary of the iconic performer's death, as both Villegas and Robillard cite Bowie's DIY theatrics as being an influence and perfect match for the passionate and tactical efforts behind the reintroduction of the Senate Theater to its respective community.

"I saw Ziggy Stardust when they did the 35th anniversary at the Detroit Film Theatre and it was, for me, the most influential day of my entire life," Villegas says. "That was the day. Any person that you ever saw that stood out, people who would get provocative reactions for the way that they looked or, like, their aesthetic, every person that was an outcast in Detroit was there. I saw a full theater of all these people that I had orbited around, like they were all connected to Bowie."

"Just to see the way that people connected through that experience was life-changing for me," she says.