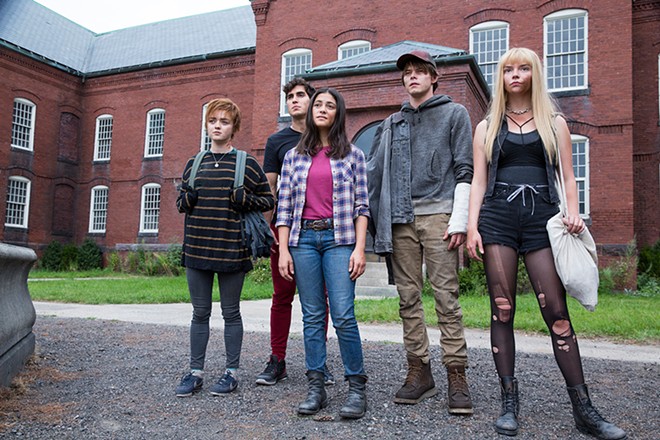 Normally, a big-budget movie release wouldn't necessarily qualify as local news. But because of the coronavirus pandemic, we, the movie-loving, CGI-obsessed, popcorn-craving public, have been starved of fresh summer cinema. That all changes this week when metro Detroit drive-ins get their hands on a new mutant-filled Marvel movie before the summer is over.


While movies like Christopher Nolan's highly anticipated Tenet, Wes Anderson's The French Dispatch, A Quiet Place 2, Wonder Woman 1984, and Black Widow all pumping the brakes on their summer 2020 releases, others have pivoted to Video on Demand streaming services, like Bill and Ted Face the Music and Disney's live-action Mulan.

However, The New Mutants — the latest (and allegedly final) entry in Marvel's X-Men saga — will hit metro Detroit drive-ins and outdoor cinemas.

Screenings start on Thursday, Aug. 27 at Emagine's 175-car capacity temporary drive-in located in Novi along the Fountain Walk. Starting Friday, it will also be screened as a double feature at Dearborn's historic Ford-Wyoming Drive-in along with Marvel's 2018 blockbuster, Black Panther.

There Is Something New To Fear. 🤫 😨

Tickets are on sale now for @NewMutantsFilm showing at the Emagine Novi Drive-In! We're showing this exciting new release all weekend!

Tickets can be purchased on the Emagine App or at https://t.co/QtBRX5onB0 pic.twitter.com/OQiItS17cE


The film, which was set to be released earlier this month, marks the first major-studio wide-release release since movie theaters closed in March. The film had more than just a pandemic-related shutdown to contend with as the Josh Boone-directed flick was originally set to be released in 2018, but was delayed twice to avoid clashing with the release of Deadpool 2 and later, Dark Phoenix, and again when Disney acquired Fox.

The film stars Game of Thrones' Maisie Williams, Charlie Heaton (Stranger Things), Anya Taylor-Joy (The Witch), and Blu Hunt (The Originals) as a new batch of misfit teens looking to embrace their mutant magic and bust out of a state-run mutant asylum. Oh, and Marilyn Manson is listed on IMDB as the “voice of Smiling Man,” so that's cool.

Though Gov. Gretchen Whitmer has yet to give the OK for indoor theaters to reopen, she recently alluded to a safe reopening strategy for businesses like theaters and gyms, which have been forced to remain closed under her MI Safe Start plan to curb the spread of coronavirus.

Tickets for The New Mutants at Emagine Novi are $30 per car and are on sale now at emagine-entertainment.com. Showtimes have yet to be announced for the film's Ford-Wyoming screenings but tickets are $12 per person and include a double feature. More information on Ford-Wyoming showtimes can be found by visiting forddrivein.com.