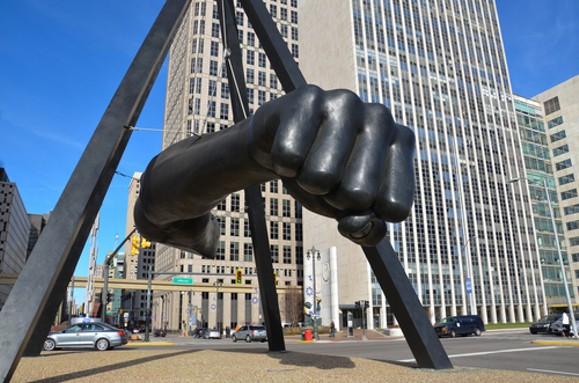 Courtesy Shutterstock
Though it's often called simply "the fist," the iconic Detroit artwork is a monument to Detroit's most famous boxer, Joe Louis.
The legacy of Joe Louis, the greatest boxer in Detroit history, has faded over time. The legendary arena bearing his name is unlikely to see the end of the year. The iconic landmark bearing his name and representing his thunderous right arm in Hart Plaza is increasingly known simply as “the fist.” That artwork, commissioned in 1986, not only celebrates the “Brown Bomber” but represents his many fights both inside and outside the ring. In fact, it’s difficult not just to envision just what a superstar Louis was in his heyday, but what a powerful impact he had on the course of U.S. civil rights.

That influence was never clearer than when Louis faced off against his most notable opponent, the German legend Max Schmeling. Louis and Schmeling fought two memorable June bouts, first in 1936 and again in 1938. The first fight saw Schmeling knock out Louis in the 12th round, the first loss of Joe Louis’ career, and a surprising upset at the time. Schmeling was a renowned boxer before the rise of the Third Reich, having been named Ring magazine’s “fighter of the year.” But after the Nazis took power, they used his success as a propaganda tool for their own ends, despite his deep misgivings.

At the time of the boxers’ first bout in 1936, Louis had managed to do something remarkable. He was not the first black fighter to contend for, or even win, the heavyweight championship, but he was the first to be embraced by the public at large. Despite the deeply engrained racism of the time, many white fight fans rooted for Louis, and among African Americans, he was a certified American hero.

Schmeling was not a supporter of the Nazi regime and reportedly undermined them any way he could, but he presented a handy prop in the geopolitical drama being acted out in the ring. Nazi publicists spoke of the superiority of the “aryan race,” insisting a black man could never defeat a white man. Louis had requested the rematch, and had said he didn’t see himself as the champion until he beat Max, and that he felt the whole country was depending on him to win.

“Win” seems like too gentle a word to describe what Louis did to Max Schmeling that night. The Brown Bomber obliterated Max inside of the first round, staggering him against the ropes before dropping him three times en route to a TKO. The men were 1-1, but the more impressive victory undoubtedly belonged to Louis. The victory was a triumphant moment both for national pride and the fight against racism. Much like Jesse Owens’ famous run at the 1936 Olympics, Louis had shown the cracks in Hitler’s twisted logic on a grand platform.

There would never be a rubber match, in fact, quite the opposite: Schmeling and Louis became friends after the bout, with Max even supporting Joe financially when Louis fell on hard times. The two matches were the most important of both men’s careers, and played a key role in shaping more than just the culture of boxing. It helped Americans accept, and even embrace, the idea of a black celebrity.

As June comes to a close, now is an excellent opportunity to review two of this Detroit icon’s most historic bouts.

Detroit’s Tangent Gallery celebrates that bar from a long time ago in a galaxy far, far away with ‘Space Dive’ events