Is it curse or menace? And where the hell did it start? 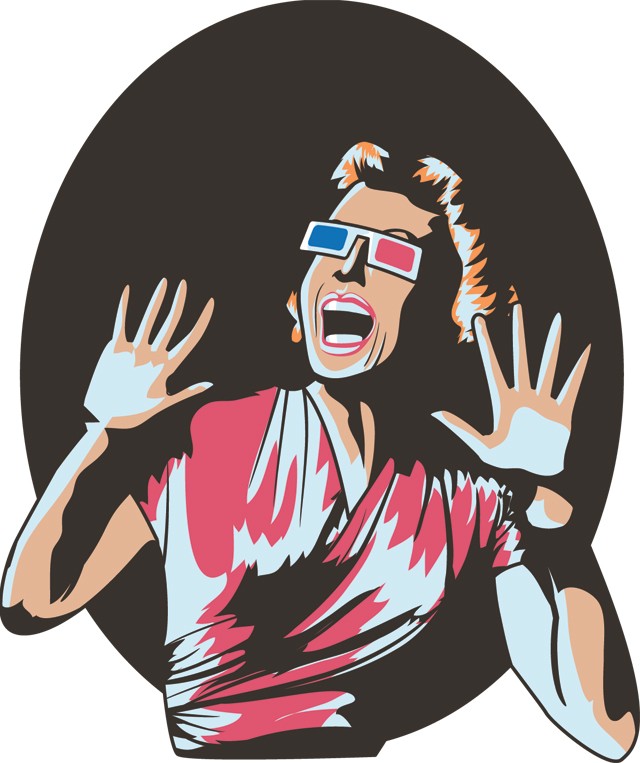 With the noisy summer blockbusters gone and mostly forgotten except for a mild lingering case of tinnitus, and the classy "prestige" pictures of awards season not quite ready for their close-up, mid-autumn becomes a graveyard for quality. This year, Hollywood essentially punted the Halloween season creatively, resorting to sequels, horror and high-tech gimmickry to draw in those teenagers too old to trick or treat. Clearly it's working: Both Jackass 3-D and Saw 3-D have been huge hits, extending the shelf life of the most insidious gimmick in movie history, one that absolutely will not die, a cinematic process so lucrative that it promises to make us all look totally dorky in our clunky Elvis Costello glasses for decades to come. Driven by the otherworldly profits of Avatar, and not slowed down by bombs such as Clash of the Titans, three-dimensional mania has become an all-consuming obsession for studios rushing to convert their latest "tent pole" superhero flick into a living ViewMaster slide, or to besmirch our collective childhoods by again fiddling with beloved 2-D genre favorites Star Wars and Indiana Jones, like some demented grave robber intent on creating an undead monster. Though the current fixation seems more persistent, 3-D has been around in various experimental forms since the 1920s, and has seen several major booms and busts over the decades, with bleary-eyed audiences rejecting the gimmick when the novelty burns off, only to embrace it again every decade or so.

Here's a quick look at the format's many high and low lights:

B'wana Devil (1952)
An abysmal jungle cheapie based on the true story of some man-eating lions that went on a killing spree at the turn of the century, munching African railroad workers like Doritos until the great white hunter saved the day. A pretty lame movie, but just exciting enough to distract viewers from that newfangled TV — and the '50s boom was on.

Hondo (1953)
The stereoscopic craze hit such a fever pitch by 1953 that the big boys got in the act. Hondo features the Duke coming right atcha in all his two-fisted, politically incorrect glory as a renegade cavalry scout defending a caravan of settlers from a massive Apache raid. There's big-time, 3-D-ready action with fists, snakes and about a million arrows flying at the screen. Some of the action scenes were actually lensed by John Ford, which helped drive the already high budget through the stratosphere.

House of Wax (1953)
A minor Vincent Price classic, and the one '50s 3-D flick most people remember. A generally entertaining and high quality horror romp, it did resort to some cheesy stunts, such as hitting a paddleball directly at the camera, leading years later to such immortal SCTV spoofs as "3-D House of Beef."

Spacehunter: Adventures in the Forbidden Zone (1983)
This silly Sci-Fi yarn was yet another post-apocalyptic Road Warrior knockoff, and emblematic of the super-cheesy fare that dominated the '80 3-D boomlet. It does feature a pre-fame Molly Ringwald in all her spunky redheaded glory, though.

Jaws 3-D (1983)
Not as big a box office flop as you've been led to believe (a modest hit, actually), but every bit as awful as you can imagine. This installment finds a blow-dried Dennis Quaid trying valiantly to keep his hair dry. To maximize the effect, the producers relied on slow-mo shots of the atrocious shark puppet moving very slowly toward the camera. Even in 3-D, the shark looked flat and phony, but the perky talents of delightful Bess Armstrong really popped right off the screen.

Shark Boy and Lava Girl (2005)
Hot off the success of the Spy Kids franchise, director Robert Rodriguez turned to his school-age children for story ideas, and it shows. This chaotic, kid-centric superhero yarn tanked at the box office, and also bears the shame of unleashing "Mr. Shirtless" on the world. Eleven different effects crews worked on the film — and still ended up with a confounding, blurry, green-screen nightmare. This was one of the last films to use the old school Anaglyph process, with the chintzy red and blue glasses, and the result was a headache-inducing vomit-fest.