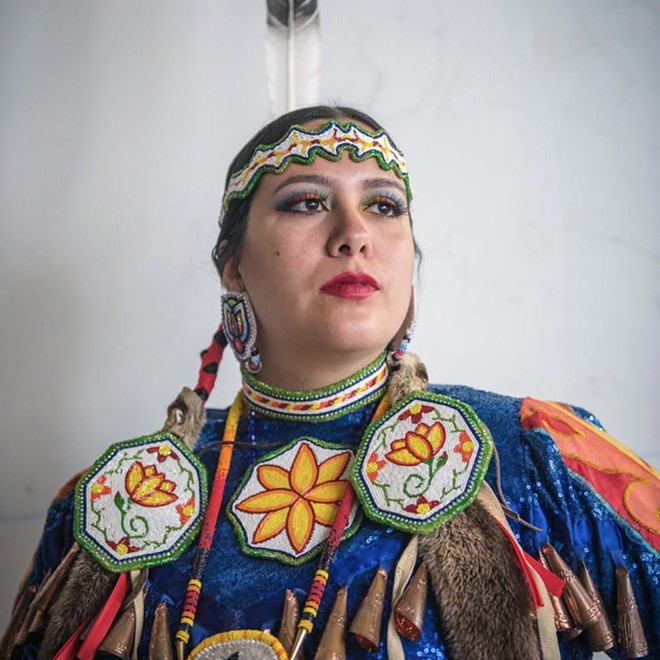 Courtesy photo
Anishinaabe artist and beadworker Hadassah GreenSky is one of the 2022 Kresge Artist Fellows.

Another year, another round of metro Detroit artists will receive a no-strings-attached stipend to further their artistic journey. The 2022 round of Kresge Artist Fellows and Gilda awardees were announced in the categories of live arts and film and music on Thursday.

Some standout 2022 fellows include Anishinaabe artist and beadworker Hadassah GreenSky, who co-founded Michigan’s first Native music festival Vibes With the Tribes, and music composer Theo Parrish, who started Sound Signature Recordings in the '90s. The music studio has been manufacturing vinyl records independently since 1997, using the legendary Archer Record Pressing Co. on Davison Avenue in Detroit.

“The powerful pool of creatives from Detroit this year reflects the dynamic innovation, historical memory, and importance of creating transformative spiritual experiences,” 2022 Film & Music panelist Piper Carter said in a press release. “With a commitment to community, Kresge Artist Fellowships and Gilda Awards represent an appreciation for advancing the artist’s craft and the purposeful ideas needed in and for our world at this time.”

Award recipients are selected by panels of local and national arts practitioners from their respective disciplines. Contrary to what some may think, the awards aren’t a popularity contest based on who has the most notoriety attached to their name — both emerging artists and seasoned veterans are recognized. Selection criteria focuses on the quality of an artist’s work, the potential to grow and advance in their career, as well as the potential to reflect, enhance, or impact metro Detroit communities.

Kresge Arts in Detroit has awarded more than $7.36 million to metro Detroit artists through the Kresge Artist Fellowships, Gilda Awards, and Eminent Artist Awards since 2008.

“These are 31 artists we can look forward to seeing, hearing, and experiencing in the months and years to come thanks to this program that supports and elevates artists individually,” Kresge President and CEO Rip Rapson said in the release. “But it is of at least of equal importance that these artists remind us of our arts community’s collective contributions to the sense of our cultural roots and our future possibilities.”

A full list of this year’s winners is below: